I wrote some pieces for Kentucky Humanities magazine.

“Creation vs. Evolution.” On the Creation Museum controversy. 2009
"A Kentucky Home." On the headquarters of the Presbyterian Church (USA) in Louisville. 2001
“The Millennium:  Theories of the End.” 1998
“The Religion Market.”  1997

I also wrote a somewhat notorious article in Christianity Today in 2002, "The Battle of Lexington and Wilmore." 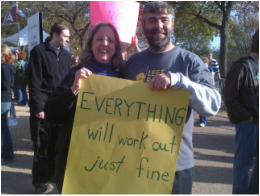 Rally to Restore Sanity, with Susan Weston
The News

I was interviewed for the Startup Societies Summit on centrism, social experiments, and separatism.
​
I had my 15 minutes of worldwide fame for my coffeehouse class. An Associated Press story went everywhere; it was in papers in Moscow, Beijing, in Stars and Stripes in Iraq, on MTV.com, and many local newspapers like this one. I was interviewed on the radio in Alberta and Japan. Many students writing coffee papers wrote to me. The class even got into Bryant Simon's Everything But the Coffee: Learning About America from Starbucks when he generously shared the manuscript with us.
The college made a webcast from the class.

In 2016 - 17 I had a weekly interview on WKYB about happiness and social science research.

I got to give the first "Flameside Chat," an interactive webcast, on happiness.

We organized 60 students, sponsored by Centre Democrats and Centre Republicans, to take a bus to DC for Jon Stewart's "Rally to Restore Sanity."

We invented an "editorial assistant" internship so my helpful students could help me with the Altruism, Morality, and Social Solidarity newsletter.

I got to travel in Turkey and Strasbourg with the Brown Fellows.

Each year we donate "Weird Pizza With the Westons" to the United Way Favors Auction.

One of my favorite public lectures is "The World is Getting Better."

My students rose to a fund-raising challenge in a gratifying way.